#hombresnomachos was the first campaign that was created, run and financed only by La Incre. This means that there was no client behind it and that the entire campaign was developed by La Incre and its allies.

We all know how toxic the idea of ​”macho” is and not only for women, but also for men. And although it is important to talk about gender, masculinity, feminism, etc., statistics show us that most of Latin America still does not care about these issues. Therefore, this campaign sought to promote conversation about what it means to be a man and thus make us reflect on our ideas and attitudes to see which of them can be harmful to other people and to ourselves. Why is it important? Because these are some of the numbers of Machismo: 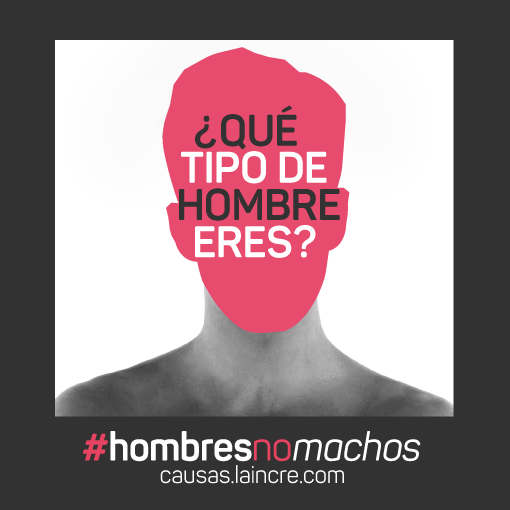 Who hasn’t heard something like “boys don’t cry”? Or maybe “men don’t wear pink”? That idea of ​​how a man should be and the stereotype of the “macho” are everywhere and, little by Little, they become part of our lives. From the beginning, this campaign wanted to question that idea of ​​masculinity in which men have to be brave and strong, even if that means falling into violence and intransigence. This imposition of such a narrow model leaves out most of the men who can’t and don’t want to fill that mold.

The first step to create this campaign was to do a rigorous investigation of how machismo and the idea of ​​the macho really affect men and women in Latin America. The official figures, although not always updated, showed an indisputable and worrying reality: machismo is present everywhere, from personal relationships to legislation. We also investigated new ways of approaching the issue of masculinity from the academy, journalism, activism and social movements. Thanks to these investigations, we were able to gather enough material to create a solid and effective campaign.

Being our own campaign, we needed to find allies who were interested in the subject and who wanted to join this initiative. After some conversations and meetings, we had the support of Planned Parenthood Global, Vertigo, Imán Transmedia and FES-ILDIS and we had everything we needed to start thinking about the campaign. We knew that the campaign was going to generate conversation and that many of the comments we would receive were going to be aggressive. Still, we decided that, no matter how aggressive or insulting the comments were, we would answer all of them comments in a friendly and direct way.

In order to convey the central idea, we needed a product that was easy to consume and share but that made people think. In that sense, a video was the most appropriate and with that in mind we developed a first draft for a script. Thanks to the support of Vertigo, an Ecuadorian production company that was with us from the beginning, we were able to make the necessary adjustments to this first idea and shoot the video at the beginning of December 2017. Vertigo’s team experience and advice were vital to ground our ideas and make them a reality in a product of the highest quality that was the key to the campaign’s success. Once the video was ready, we began the development of the website, which would contain all the information obtained during the investigation, which was divided into 4 parts:

Besides these 4 sections, the website also has a section for people that want to get involved in the campaign and share its content. With the website and the content ready and designed, we only had to decide the launch date, which was set on June 4, 2018.

Thanks to the tremendous effort of all the people involved in the project, our campaign was a success.

The anatomy of machismo